The jobs report for March 2013 came out with some dismal results. Dismal is an understatement if you really look at the numbers. The jobs data suggested an increase in jobs, in the form of nonfarm payroll employment ‘edged’ (BLS’s phrase, my scary quotes) up by 88,000. The unemployment rate dropped .10% to 7.6%. Sounded weak, but plodding along, right? Wrong. There’s an old saying of ‘figures lie and liars figure’. I wanted to look a little deeper, and one of my old profs (Dr. Don Byrne) had pointed out that the underlying number were much more complex. Consider the following:

So look at these statistics
Since I like charts and graphs, I decided to chart the comparison of the population/workforce and number unemployed from the end of June 2009 (the technical end of the recession) to March of 2013: 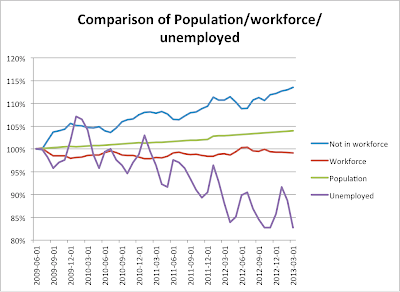 Pictures can sometimes tell us a lot (a picture is worth 1,000 data points?). Note the population of eligible workers has steadily grown since 06/09 (work-eligible population increased by about 9.3 million people, or about 4%), while the number of unemployed has gone down (by about 2.9 million, about a 17% decline). If you’re wondering about the zigzags, I didn’t ‘seasonally adjust‘ the data in the above graph, so it reflects spikes at the end of the year. So far, so good. Looks like wonderful growth and sound economic and fiscal stimulus. Now notice that the workforce went down (by 1.4 million people, or about 1%).Here’s the ugly fact: the population went up, unemployment went down, but the number of people working went down. That gives a different way to look at employment:

The number of Americans not in the workforce has increased by 10.7 million a 13.4% increase.

The labor force participation rate is the lowest it’s been since 1978. It doesn’t look to me like a lot of jobs are being created. And it makes me wonder what happens if the trend continues. Anyone know the answer? Anyone? Anyone? Bueller?


PS: A portion of the blog title is from one of my favorite movies, Ferris Bueller’s Day Off, in which Ferris skips school to have a great fun time. Somehow, it seems appropriate.